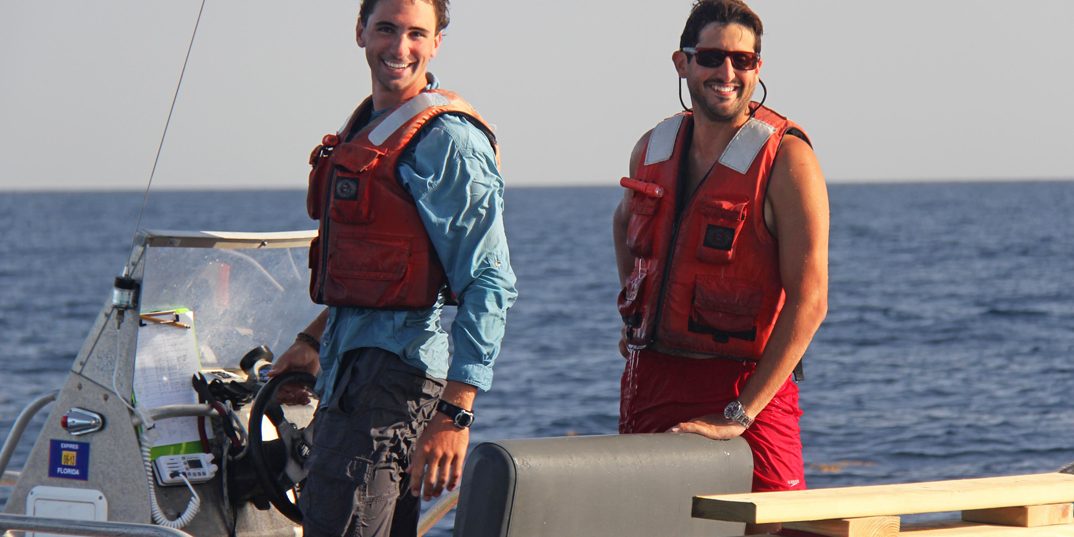 (Click to enlarge) Conor and UM researcher Guillaume Novelli (right) celebrate the end of a long day recovering and redeploying drifters. On this day, they tracked one hundred drifters, recovered their GPS data, and released them back into the water. (Photo credit: David Nadeau)

After the Deepwater Horizon oil spill, many Gulf residents wanted to know where the oil was going and how fast it would get there. Conor Smith is improving the accuracy and turn-around time of satellite-derived surface current velocity estimates for better ocean transport information.

Conor is working toward a method that accurately interprets these velocities using information contained solely within synthetic aperture radar (SAR) satellite imagery. Currently, he combines ocean drifter data and a numerical model to account for wave motion with SAR data to estimate current velocity. His goal is that SAR-based speed estimates will be accurate enough so that there is no need for labor-intensive drifter data and developing and validating a near-shore numerical model. Conor says that doing so “will be useful to oil spill mitigation, as it will provide a rapid assessment of the surface current movements that transport pollutants.”

Conor is an applied marine physics Ph.D. student at the University of Miami (UM) Rosenstiel School of Marine & Atmospheric Science and a GoMRI Scholar with CARTHE. He shares the personal influences and intellectual experiences of a life lived on the water.

(Click to enlarge) Conor (left) and University of Miami marine specialist Mark Graham (right) prepare to deploy a CTD to measure salinity and temperature profiles near the Deepwater Horizon site. Data from these measurements provide insight into the movement of the ocean surface. (Photo credit: Nathan Laxague)

Conor grew up near Chicago, where sailing on Lake Michigan with his family kept him close to the water. Before entering high school, his world changed in a big way. Conor’s parents homeschooled him and his brother for a year while the family sailed the Great Lakes and waters in Canada, the east coast, and the Bahamas. On that trip, Conor experienced wind-sea interactions first-hand while transiting locks, lakes, rivers, bays, channels, and island passes. He says that those experiences made him “fall in love” with marine sciences.

While completing his undergraduate physics degree at the College of Charleston in South Carolina, Conor toured UM. There, he met one of his future advisors, Ad Reniers, an associate professor of applied marine physics and lead investigator of CARTHE’s SCOPE expedition. Conor was accepted to the UM Rosenstiel School graduate program working under Reniers and SAR-specialist professor Roland Romeiser. Conor credits his family’s support, a childhood near the water, hard work, and good luck with fueling his journey into oil spill research.

Understanding how the ocean moves under an oil-covered surface is important to predicting where oil will travel. Conor tracks the speed of ocean surface currents using TerraSAR-X, an Earth observation satellite, which he says is similar to police radar guns. Police radar calculates car speed by emitting an electronic pulse that bounces off of the vehicle and returns to the instrument. “The satellite I work with uses the same principals to measure the line-of-sight speed of the ocean surface,” he explains. However, the circular motion of surface waves complicates current velocity calculations. To account for this motion, he checks the satellite’s speed estimates against drifter data paired with the Delft3D numerical model.

Conor conducts most of his research using conditions at the mouth of the Columbia River on the west coast. His calculations must be accurate and efficient under different circumstances, and this river inlet provides a dynamic range of ocean-surface water conditions that is perfect for comprehensive methods tests. Conor plans additional testing near Destin, Florida.

Conor has gained extensive experience with ocean surface drifters through his active involvement in two CARTHE experiments, the Grand Lagrangian Deployment (GLAD) and the Surfzone Coastal Oil Pathways Experiment (SCOPE). In these experiments, scientists released GPS-enabled drifters into the Gulf, collecting surface flow information that enhanced ocean current models and advanced our fundamental understanding of the ocean. Conor also applied his work to a real emergency response, the July 2013 Hercules gas blowout. In three days, he and fellow CARTHE Ph.D. student Nathan Laxague formed an emergency drifter deployment plan, prepared the drifters, traveled from Miami to Louisiana, and launched drifters near the blowout site. “Had there been a contaminant of some sort released, our drifters would have provided one-of-a-kind data to predict the transport of it in the ocean,” said Conor. He talks more about this event in this video.

One of Conor’s most memorable experiences was witnessing the collaborative efforts of many scientists during the GLAD experiment. Though he was initially overwhelmed by the experiment’s extensive preparations, which included building drifters, developing deployment and weather plans, and coordinating the ship’s assets and crew, he and the team worked together and successfully completed the tasks. “Working towards a common goal with a tight-knit group of people who were passionate for their research was inspiring,” he reflects. “It was both fun and thrilling to be part of a diverse team that required the coordination of so many assets. I felt appreciated for my own contributions to the group, and I learned how to better work as a team.”

Conor’s experience during the Hercules blowout response helped him see his research in a different light: “As the crippled and damaged Hercules rig came into view, I truly realized the importance of our mission and the efforts felt worthwhile.”

After completing his Ph.D., Conor wants to work in the development and deployment of ecofriendly power sources. He is particularly interested in hydroelectric turbines to be deployed in ocean currents or tidal waters. “Growing up on a sailboat taught me a lot about sustainable living. We lived comfortably using electrical power produced by a wind turbine mounted to our boat,” he explains.

Dr. Reniers reflected on the unique skills and can-do attitude that have made Conor “a pleasure to work with and a real asset” to the team. “Conor is not your typical graduate student,” said Reniers. “He has exceptional field skills. You can tell him to take care of a drifter deployment somewhere in the Gulf of Mexico and he not only preps the instruments but also devises a plan for getting the vessel ready and conducting the deployment.” Reniers cited Conor’s quick and creative problem solving as one of his most important and distinctive traits, “Whenever some logistical obstacle prevents us from doing the experiment, he comes up with a quick and effective solution. He’s the MacGyver of the Seas.”

The GoMRI community embraces bright and dedicated students like Conor Smith and their important contributions. The GoMRI Scholars Program recognizes graduate students whose work focuses on GoMRI-funded projects and builds community for the next generation of ocean science professionals.

Visit the CARTHE website to learn more about their work.

This research was made possible in part by a grant from BP/The Gulf of Mexico Research Initiative (GoMRI) to the Consortium for Advanced Research on Transport of Hydrocarbon in the Environment (CARTHE). The GoMRI is a 10-year independent research program established to study the effect, and the potential associated impact, of hydrocarbon releases on the environment and public health, as well as to develop improved spill mitigation, oil detection, characterization and remediation technologies. An independent and academic 20-member Research Board makes the funding and research direction decisions to ensure the intellectual quality, effectiveness and academic independence of the GoMRI research. All research data, findings and publications will be made publicly available. The program was established through a $500 million financial commitment from BP. For more information, visit https://gulfresearchinitiative.org/.