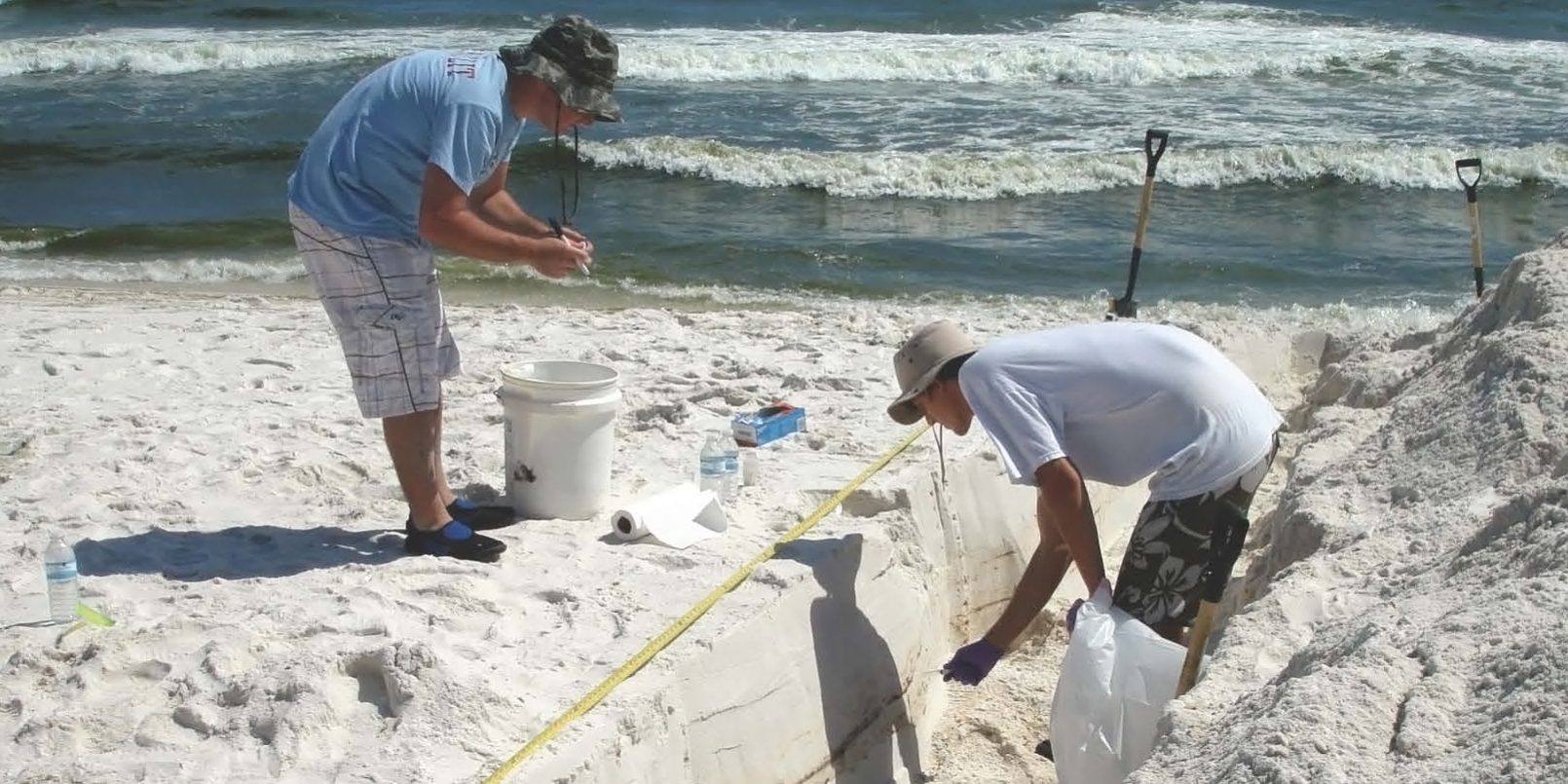 (Click to enlarge) Jonathan Delgardio and Will A. Overholt (Georgia Institute of Technology) collect samples from a Pensacola Beach sand trench with oil layers. (Photo by Markus Huettel)

Taxonomically, there was an increase in specific oil-degrading bacteria followed by a return of more diverse non-oil degrading bacteria a year later. While these returning microbes were typical for beach sand, they were different from the study area’s pre-oil community and were enriched in archaeal taxa sensitive to toxic chemical compounds. Functionally, there was a three-month increase in bacteria that degrade saturated hydrocarbons which were then replaced by a more specialized bacteria that consume aromatic hydrocarbons. They published their findings in The ISME Journal: Microbial community successional patterns in beach sands impacted by the Deepwater Horizon oil spill.

Previous studies have shown an increase in benthic oil-degrading bacteria and oil degrading gene expression in response to the 2010 spill. This study focuses on responses from indigenous microbial communities in nearshore or coastal ecosystems. The team collected sand from Pensacola Municipal Beach in May 2010 (pre-oil), July and October 2010 (oiled), and July 2011 (recovered). Using metagenomics and 16S rRNA gene amplicon techniques, they compared the functional and taxonomic profiles and assessed temporal effects of beach oiling on bacterial community composition and recovery.

The researchers hypothesized that some specialized bacteria that typically live in beach sands, such as those that need very little nutrients to survive, were outcompeted by the oil-degrading microbes after oil deposited on shore. The growth of these specialized microbes may have stopped as a result of their limited hydrocarbon-degrading ability or increased sensitivity to toxic compounds from lingering oil, which might account for the observed reduction in taxonomic but not functional diversity. They noted that the microbial community response was primarily characterized by two concomitant trends. First, most microbes were selected based on their ability to survive under disturbed conditions, correlating negatively with the level of specialization. Second, a few organisms with traits selected by the disturbance became highly abundant, as niche opportunities promotes invasions.

Joel Kostka, one of the study authors, said that the identification of sensitive marine groups could inform future response. Kostka explained, “Specific microbial groups could serve as sentinels or bioindicators to tell responders whether important ecosystem services such as organic matter decomposition and nutrient regeneration are impacted by oil exposure.” He continued, “With an established baseline for the microbes present in beaches, we could advise environmental managers as to when the ecosystems had been restored to close to their original condition.”

Here are other publication summaries, referenced in this study, on microbial communities’ response to the Deepwater Horizon oil spill:

This research was made possible in part by a grant from the Gulf of Mexico Research Initiative (GoMRI) to the Deepsea to Coast Connectivity in the Eastern Gulf of Mexico (DEEP-C) consortium. Other funding sources include the National Science Foundation (1241046; OCE-1057417; OCE-1044939; NSF Graduate Research Fellowship 2013172310).