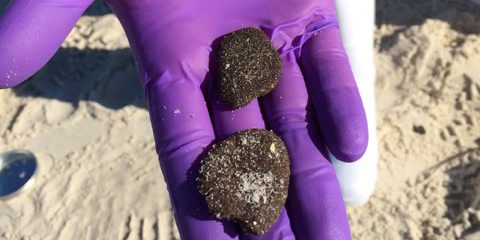 An international science team investigated the effects of weathering of petroleum biomarkers on the reliability of these compounds for fingerprinting Macondo oil.

They identified individual biomarkers that were resistant to weathering processes and others that were depleted by these processes. Most biomarkers were suitable to identify Macondo oil up to 28 months post spill. The researchers published their results in the June 2014 edition of Environmental Science & Technology: Recalcitrance and Degradation of Petroleum Biomarkers upon Abiotic and Biotic Natural Weathering of Deepwater Horizon Oil.

During the investigated time scale, weathering processes appeared to have little to no effect on most hopanoid, sterane, and diasteranes biomarker compounds. However, hopanoids containing more than 31 carbon atoms and triaromatic steroids were significantly degraded by biodegradation and photooxidation, respectively. The team confirmed that biomarker ratios for these compounds in weathered Macondo oil differed noticeably from other Gulf of Mexico oil sources.

Researchers suggested that the degradation resistance of hopanoids ≤ C31, steranes, and diasteranes validates their ability to distinguish Macondo oil from other Gulf of Mexico oil sources. They also cautioned against using hopanoids > C31 and triaromatic steroids for fingerprinting weathered oil because of their susceptibility to degradation. The team noted in other environments, such as the deep sea, the stability of biomarker compounds could be different than that observed in this study on the sea surface and beaches.

This research was made possible in part by a grant from the Gulf of Mexico Research Initiative (GoMRI) to the Deepsea to Coast Connectivity in the Eastern Gulf of Mexico (Deep-C) consortium. Other funding sources include the National Science Foundation (OCE-0960841, RAPID OCE-1043976, RAPID OCE-1042097, EAR-0950600, OCE-0961725, OCE-1333148, and OCE-1333162), the Swiss National Science Foundation, the Spanish National Council of Research, and the European Social Fund.